3 Things to Consider Before Taking a Public Stand

Whether or not your business or organization’s leadership has chosen to publicly participate in the political arena, your team should be monitoring the latest political developments in order to determine if engagement is necessary at any point. Here are three tips to consider before taking a visible stand.

Whether or not your business or organization’s leadership has chosen to publicly participate in the political arena, your team should be monitoring the latest political developments in order to determine if engagement would be beneficial - or necessary - at any point. In the current political climate, it is more important than ever for your organization to be proactive about preparing statements regarding relevant issues (especially in the event that your organization is involuntarily brought into public dialogue). Here are three tips to consider before taking a visible stand:

Gone are the days when press releases solely reigned the media kingdom. Today, social media shapes how news stories are told and how the narrative unfolds. A simple tweet from the President can bring your organization into a heated public discussion overnight (see screenshot below). Even if leadership in your company or group is reluctant to take an official stance on a political or social issue, it’s best to stay vigilant and have crisis communications prepared for social media, should the occasion arise. As Stan Steinreich writes, "corporations are going to have to move with the times and join the social media discussion much more rapidly than they generally have" in today's world. 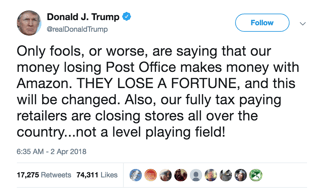 Earlier this year, the Wall Street Journal published an article, “You’re a CEO - Stop Talking Like a Political Activist” in which the author, Sam Walker, recommended that C-suite advocacy communications should relate back to the company’s core function. For an organization unaccustomed to participating in advocacy at any level, Walker's advice is particularly relevant. Justifying political and social stances by tying them into objective metrics, such as business goals, is one technique to potentially mitigate any pushback fueled by emotion.

3. Listen to Your Consumers

A 2018 study conducted by Social Sprout discovered that consumers increasingly value a company's willingness to engage in political dialogue. More than half of the consumers surveyed in the study believed that it was important for a brand to take a stand on either a social or political issue. Furthermore, just over half of respondents considered social media to be the right channel for companies to go public with position statements. Whether it's a tweet published on a CEO's personal account or an announcement posted across institutional social profiles, Sprout Social's study strongly suggests that brands should consider public displays of advocacy for the sake of maintaining and acquiring customers.

How Associations Can Drive Policy Progress in a Polarized System

6  Factors Association Advocacy Has in Common with Political Campaigns

Here are 6 functions that both political campaigns and association political advocacy outreach share in common: