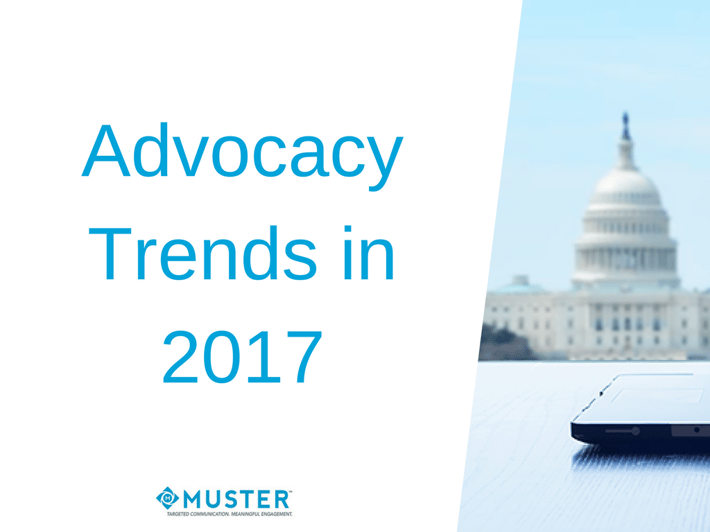 A tumultuous election year, a change in administration, unparalleled global activism and the rise of new media have all contributed to the way that political advocacy is conducted and affects policy. As 2017 unfolds, individual citizens, organizations, and even for-profit companies are speaking out on social issues and engaging in various forms of advocacy. Here are 5 trends we expect to continue to develop throughout the year:

Social Media as a Viable Form of Constituent Communication

President Donald Trump has championed the use of Twitter as a means to communicate directly with citizens. This direct two-way communication allows the President to present his viewpoints and opinions in an unfiltered way and receive real-time feedback from constituents. In addition to Twitter, we’ve seen many legislators take to live-streaming videos of themselves on Facebook. Recently, Senator Elizabeth Warren received over 6 million views in a video she shared on Facebook Live. Social media is allowing elected officials to engage with constituents without the traditional formalities that once guided constituent communications. On the flip side, social media also provides an instant way for concerned citizens to contact their elected officials. As 2017 continues, we expect to see the steady use of social media as citizens express their opinions and send messages to legislators through different platforms. We also anticipate that offices of elected officials will look to develop broader protocol to handle the influx of messages and ensure their constituents’ voices are heard. At present, gathering constituent sentiment in the Twittersphere is nearly impossible at the Federal level, although tweeting at legislators may indeed catch the attention of politicians at the state and local level.

The Emergence of Online Advocacy

Online civic engagement tools are here to stay. We’ve noticed a steady increase in the number of companies offering digital political advocacy services. We’ve also noticed a surge in the demand for these types of engagement tools as organizations grow their advocacy programs in light of the changing political environment in the United States.If you are a member of a nonprofit or trade organization, expect to receive more emails from these organizations you support asking you to take action and contact a legislator. In a world where time-strapped professionals are looking to make an impact, online advocacy is the remedy. Furthermore, mobile usage will also be changing how online advocacy is accessed by supporters. Advocacy campaigns receive high engagement from supporters who check their emails on their smartphones, thereby taking action with a few taps of their finger.

Despite ubiquitous new technology, texting and social media (the list could go on), calling legislators over the phone seems to remain the most effective form of communication with an elected official. We expect to see cause-oriented organizations and other advocacy groups providing their supporters with legislators’ phone numbers and phone-call scripts. In particular, we anticipate federal level officials to receive continue to receive phone calls from citizens. Since the change in administration, we have noticed many articles circulating online that explain the impact phone-calls have in federal offices (notably, this article by a former staffer).

As online tools and programs become integrated into political advocacy programs, analytics are becoming more and more useful to those who conduct the campaigns. We expect to see mission-oriented organizations taking a data-drive approach to advocacy and producing more targeted advocacy campaigns. Analytics are becoming a fundamental component to executing a successful advocacy campaign. Some online services now use data to predict how a legislator will vote and some programs can even determine how many supporters an organization has in a certain district. As online software develops and technology capabilities grow, we are confident that new ways to interpret and use data will emerge.

In sum, we look forward to an exciting year ahead as more citizens, organizations, and companies get involved in political advocacy.

How to Write Compelling Language for an Advocacy Campaign