While vocabulary may differ slightly between different state legislatures, we’ve put together a brief glossary of frequently-used terms in public affairs:

Legislative lingo is as familiar as a native language to government relations professionals. For those newly involved in the association advocacy arena, reviewing a comprehensive glossary of legislative terms may be helpful. While vocabulary may differ slightly between different state legislatures, we’ve put together a brief glossary of frequently-used terms in public affairs:

501(h) Election: The result of the process in which a 501(c)3 organization elects to lobby by submitting IRS Form 5768. You can learn more about this strategic lobbying decision by reading this blog post.

Adopt: To approve and accept an amendment or resolution

Advocacy: Attempting to influence public policy, public opinion, legislation, or a cause.

Amend: To make a change in a bill or a law, i.e., altering the bill’s language, adding a proposal, etc.

Appropriation: Amount of money designated for use in a specific project of government-identified purpose

Bill: A proposed law being considered by a legislative body

Bill Number: Each bill is assigned a number for identification prior to being presented in front of the legislative body

Bill Status: The status describes where (i.e., in which legislative body) the bill is currently being considered, or it has not been approved

Caucus: An informal gathering of legislators, typically of the same party, to discuss a legislative issue

Committee: A body within the legislative body composed of legislators, charged with reviewing items pertaining to a specific issue

Convene: To assemble and meet, i.e., when legislative bodies convene during the day

District: The identified geopolitical area that an elected official represents

Join Committee: A committee composed of members from both houses

Grassroots lobbying: Urging the public to communicate with their representatives on a defined issue or piece of legislation

Lobbyist: A government relations professional, or individual who is registered to represent an organization or cause by seeking to influence legislation. Also known as “Legislative Advocates”

Passed: When a bill has been approved and voted on by the necessary elected officials

Subcommittee: A subsection of legislative committees that examines a certain topic from the overarching committee’s issue

Veto: At the state level, a veto is the overriding act of a Governor disapproving an item 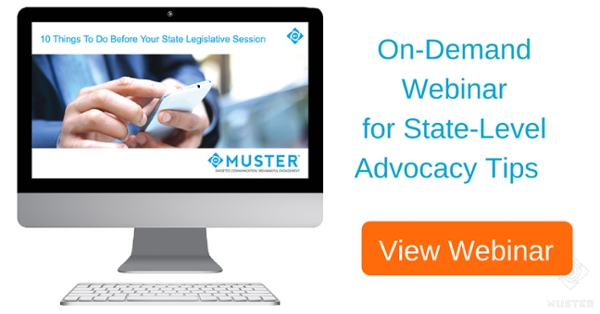 How to Increase Your Grassroots Advocacy Email Open-Rates

Subject lines are extremely easy to change and make a huge difference in increasing advocacy open-rates.

How Much Will Advocacy Software Cost My Organization?

Through our work with trade associations and nonprofit organizations, Muster has learned much about different association management software (AMS)