Offline and Online Tactics to Grow Your Advocacy Network

In the second episode of our video mini-series, "How to Grow Your Grassroots Advocacy Network", our guest, Brian Cannon, Executive Director of OneVirginia2021, discusses online and offline tactics nonprofits can use to grow a political advocacy network. Brian brings over a decade of experience in non-profit leadership, community building, fundraising, and bipartisan advocacy for state policy issues. Click below to view the second installment of a three-part web series:

What would you recommend for starting an online advocacy program? And what are some of the social media channels you might recommend?

Brian: Sure, well I think Facebook has been the best for us social media-wise. I can’t keep up with Instagram, it might just be that i’m a little too old for that, and Snapchat I have no clue how to use it. But Facebook has been such a good tool for us, and I think what you have to do is, you gotta do a little bit reading about whatever platform you use, what they like, what the company values-- and so you gotta kind of figure out what’s there for, not just your people to consume, but also what’s there for the company, the platform you're using, what they prefer over others-- which is an interesting thing to realize, like Facebook prefers native uploaded videos to them versus YouTube links that we just might think-- because normally we just upload the YouTube link, but Facebook doesn't own YouTube, right?

Brian: Sure, so having an action center is great, emailing it out to people is great, but the real way to grow that network is to take that action center alert and put it onto Facebook, probably twitter and whatever else you’re using and push it out there. That’s a great way to have that conversation and they’ll share it to other people you weren't reaching, just by email-- I mean email is probably old and slow-- which is weird to think of-- email is supposed to be the fast way to do things, but it’s old and slow compared to how instant social media is-- I mean people are checking their social media much, much more than their emails, so that makes a big difference. So you have to get out there on your email and provide that, I also think that you just can’t instantly ask your people to help you have to give them interesting things to keep them engaged. Almost-- I heard a lot of people talking about building a brand voice on social media, which sounds like a lot more work than I think it is. I think-- just find your style, whether it’s a little bit snarky, whether it’s really serious, whether it’s somewhere in between, finding a style that makes sense to you so your people can enjoy the conversation that you’re getting out there. You’re providing them some interesting articles, something in the New York Times, it may not be relevant to your state, but just relevant to the issue broadly speaking-- Or when you make an action alert, you do, you know All Caps action alert, colon kind of messaging, They’re like “Oh, I need to pay attention.” And the other stuff is they will have clicked and shared and liked-- So Facebook will keep feeding them that stuff in their newsfeed if you’ve provided them things that your supporters find interesting. So it’s an interesting way to do it.

How much of a role does graphic design play? And what are you doing online?

Brian: Oh, I wish we could hire a graphic designer, but we’re too small for that-- We’ve got three full time staff, which I know is big for some, small for others-- But what we found was an online, cheap way to do this, and I wish I was getting paid by Canva to plug them as hard as I am going to plug them here...everybody at home... canva.com, they've been a lifesaver for us. What they do is-- Because a lot of times if you just upload a picture onto Facebook, it might not be sized the right way. So part of it might get cropped in your post, and you won’t get your full message out there. But Canva has tools, whether you're going with a Facebook banner, whether you're doing a Facebook profile picture or whatever, or a Twitter banner-- or profile, Instagram, or even a powerpoint presentation-- You’ve got all these sizing tools for you to use, most all of it is free, every now and then you can pay for stuff-- you can get a pro subscription, But it’s a freemium service, and we’ve used the heck out of the free part of it, and it really helps-- Because I will tell you, Facebook really loves videos right? They love videos that are their own content-- but they also love pictures right? And people love pictures. And so putting your messaged baked into that picture, whether it’s a little tiny message-- or just taking a link that you put up there and then uploading a picture with it so that-- it’s not the standard, default link that comes up when you put in the Muster Action Alert link, but you put in a more interesting picture, and that helps it get around there for your people.'

Can you talk just a little bit about what are some of the key areas that you would focus on for offline tactics when you’re trying to grow an advocacy network?

Brian: Sure. Well I will say we’ve done our lot to build online, and there’s nothing cooler when you meet a supporter you’ve seen online-- they like, they share your stuff, they comment, they help knock down trolls who might pop up right? And then you meet them at an event and you’re like: “Oh my gosh, you’re Matt!” Right? So it’s really cool to have that experience-- and so I think, as best as you can you’ve got to have events. I think you should set the bar low for your events-- We now have events where we are selling out event space because we’ve got so many supporters. But that’s a new phenomenon for us. We are used to being a twelve to twenty-two person event kind of thing-- And that’s ok, you have to make everyone feel grateful that they’re there-- I think you’ve got to give them content. So we have a documentary about Gerrymandering that we show, it’s been a great tool for us to go out there and have conversations. It’s also a great way to get your partner organizations engaged. A lot of partner organizations have people where we don’t. So we can go into Loudon County and partner with people out there, and they will help us build our list as well and build our supporter reach. I think when you go, you have to call a local reporter. I don’t do this well enough but everyone should, if you are an advocacy organization and you go into a town and if that person who is the representative of that town, whether they’re the delegate, senator, mayor, whatever it is, you have to let them know. I am so bad at this but I know I need to do better, but you have to do that.

So you actually get a hold of the legislator, let them know you’re there, you’re having an event-- do you invite them as well?

Brian: Yeah, Yeah, absolutely. I mean I think you can’t let them know unless you’re gonna-- at least let them come and usually if you let them come you’ve gotta acknowledge them or give them a moment to speak. I mean it certainly depends on if they’re friendly or not, but I think the better bet is to try to find a way to invite them-- and you should be giving information out that you would want them to know as well, right? And so-- then at all these events you gotta be bold enough to ask for them to sign your petition--and so we don’t open up a laptop and have them sign it through Muster like we do online for people, but we have a petition printed out that we’ve printed out that has all the information we need-- and we tell them if you provide us your email address, it will not only let us know that you care about redistricting reform, but it will email your delegate and senator as soon as we upload it later tonight or tomorrow -- And tell your delegate or senator that you care about redistricting reform too -- and that’s been a great way for us to get people to do it, it’s almost like three things for one little action -- And that’s a great way to grow. And then, by the way as I mentioned in the first video, you gotta keep track of who these people are from each event. So I need to know the twenty-two signatures I got from that coffee shop event in Loudon -- We gotta know who those people were, because you might want to go back and say “hey it was great to see you guys -- six months ago, we are going to be in the area again, hope you can join us.” And make it personal for your people.

Any other advice that you would have about offline events?

Brian: Yeah, no, I think the one other thing we learned is meeting people on election day is a great way to talk to them. It’s at the height of their civic “I give a damn,” right? They care that day -- so if you’re an advocacy group that has something that is impacted by those we are electing, it’s a great way to be out there and have that conversation. Whether you’re petitioning, whether you’re just giving literature, whether you’re just mailing a couple precincts around the state where there are legislators -- You want to go to your legislator's precinct to let them know that you’re out there. Whatever it is, I think having a presence at the polls can really drive-- It’s our biggest day of online -- It’s the biggest increase in supporters that day, is our presence at the polls. We found that we get anywhere from 14-24 new supporters for every person who volunteers to work a precinct for us.

Muster is a CAE Approved Provider! 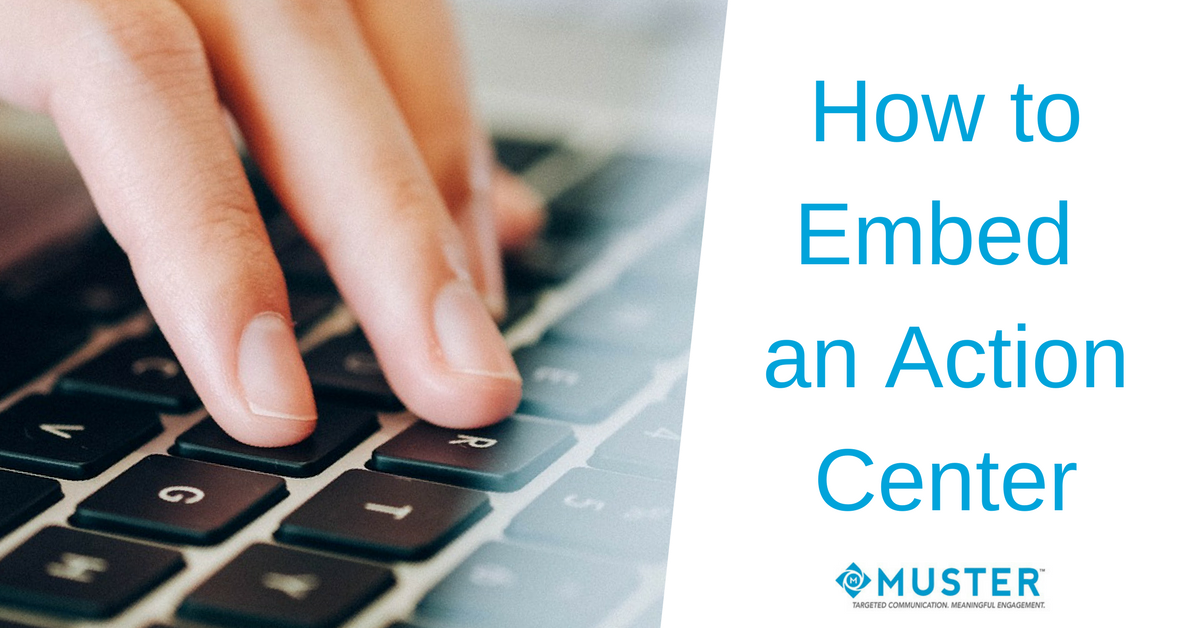 How to Embed an Action Center for Online Advocacy